What is Allergy Immunotherapy (Desensitisation)?

Allergy immunotherapy treatment, sometimes referred to as ‘desensitisation’, was first used almost a century ago and is today widely regarded as safe and effective as well as being a fully licensed treatment.

Immunotherapy is backed up by extensive scientific research. Recently, Acarizax became the first fully licensed Dust mite Allergen tablet in the UK, as a result of rigorous assessment of its safety and effectiveness. Desensitisation works by exposing the immune system to regular high doses of an allergen extract in order to reduce allergic symptoms. This then dampens the immune response, which reduces the severity of symptoms and the need for medication.

House dust mite allergy is common and can cause persistent and irritating symptoms int he eyes and nose as well as more troublesome sinus symptoms and exacerbate asthma. While existing medications such as anti­histamines and steroid based medicines can alleviate some of the suffering, symptoms continue to bother many throughout the year. Such patients can often benefit from immunotherapy, which reduces or turns off the body’s response to the dust mite allergen (actually the mite’s faeces rather than the mite itself). Immunotherapy is the only treatment which affects the underlying cause of an allergy by retraining the immune system into becoming less allergic and therefore improving symptoms significantly.

How Does Immunotherapy (Desensitisation) Work?

Immunotherapy works by administering the patient with regular high doses of an allergen extract in order to reduce allergic symptoms. This then dampens the immune response, which reduces the severity of symptoms and the need for medication.

Because the immune system has a memory, the effects of immunotherapy may continue to be felt for years after the treatment is complete. Unlike any other existing allergy treatments, immunotherapy can therefore have long term benefits and in children it has been shown to prevent the future development of additional allergies and asthma symptoms.

Tablets are taken under the tongue (sublingual) daily.  Over time this reduces the reactivity to the allergen (desensitisation).

What are the benefits of allergen immunotherapy?

Large scientific studies have confirmed that immunotherapy can be used to reduce the symptoms of allergic rhinoconjunctivitis and asthma caused by dust mites. Most patients receiving treatment also report needing to use less medication. As immunotherapy actually changes the way the body’s immune system reacts to the allergen, the beneficial effects continue beyond the 3 years that the treatment is given for.

Using immunotherapy from an early age may actually prevent new allergies developing and reduce the likelihood of getting asthma in later life. However, immunotherapy only works against a particular allergen. So, for example, having immunotherapy to dust mite may help with the symptoms this causes but will not help with hafever caused by allergy to pollens.

There are different ways of performing desensitisation. These include:

Our doctors will discuss with you which type of immunotherapy may be best suited for you. Once a decision has been reached, you will be provided with more detailed information about the particular type of treatment.

Food desensitisation is an area of increasing interest and we are already using this in our practice (eg for peanut, milk and egg allergy).

Daily doses of the allergen extract are given to the patient, which are taken sublingually (under the tongue), and this dampens the immune response and reduces the severity of the symptoms during the next hay fever period.

What Are The Side Effects Of Immunotherapy (Desensitisation)?

Like all medicines, sublingual immunotherapy can potentially cause side effects. In the early stages of treatment it is common to experience the following within a few minutes of taking a dose:

This is a mild allergic reaction and in most cases settles down within 20 minutes of starting treatment but can be alleviated with simple over-the-counter antihistamines, such as cetirizine or loratidine.

What Is The Success Rate Of Immunotherapy (Desensitisation)? 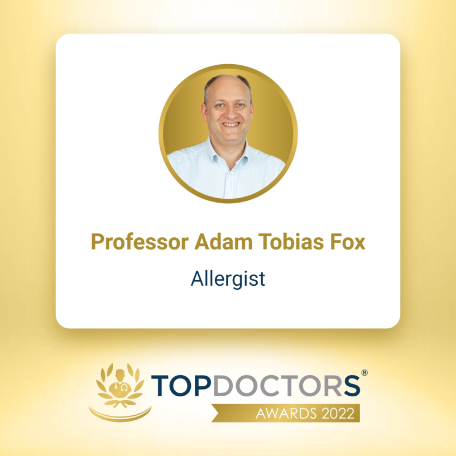